We all know his brick-phone, but we may have forgotten his guidance to put down our phones and connect.

It was Zack Morris, though, that taught me about tech etiquette. Alongside being the big man on campus and getting into all types of high school high jinks, he was able to offer some sage advice about being present in the moment.

While he is well known for his brick-sized cell phone, we may have forgotten his commentary about proper phone use. Long before popular YouTube videos like I Forgot My Phone and Look Up examined how we are often glued to our devices instead of connecting with those around us, Zack Morris tackled the issue.

Check out the episode Rent-a-Pop (Season 3, ep 7, 20 minutes in; available on Netflix), which features Zack’s rascal of a dad, Derek. Derek Morris is obsessed with his phone, so much so that he is oblivious to Zack’s life and has become an absentee father. When Zack needs his father’s permission to go on a ski trip, Zack decides it would be easier to hire an actor to play his father. When his real father, Derek, catches wind of the duplicity, the ski trip is off.

This leads to a face-off between father and son, where Zack Morris lays the smack down on his dad’s poor tech etiquette.

Derek: “You used to tell me everything. What happened to us?”

Zack: “That’s what happened to us.” [Derek talks on phone]

“See, that’s the problem. You’re always on that stupid phone.”

Zack: “Is it more important than your family?”

[PHONE RINGS / Derek is on the phone talking. Zack walks to the corner of the room and covertly makes a call to his dad. His dad, not available to his son but always for a call, picks up the phone.]

Zack: “Is this the only way I can get through to you now?”

[Conversation; dawns on Derek that he’s been kind of a prick.]

Derek: “Son….son, when was the last time we sat down and had a long talk?” 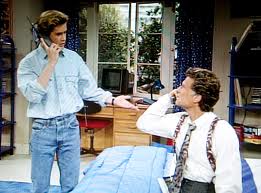 Zack and his dad have a conversation about baseball. The phone rings again. Derek, trying now to be a better father, tells the person on the phone that he is taking his son fishing.

I have no idea if Derek kept his promise to take Zack fishing after the canned applause died down and the episode ended. But one thing is clear: if you are looking to connect, put down your damn phone and talk to the person next to you. Take it from Zack Morris.

“It would be amazing in a utopian world where technology freed up our time to do other things,” says spoken word poet Marshall Davis Jones. “Unfortunately,” continues Jones, “we were not ready for such a major shift in consciousness.”

Jones intimately knows the benefits and pitfalls of our always-on culture and both the allure and trappings of “being connected.” As a performer with a rapidly growing international profile, he has a strong incentive to spend hours harvesting likes, views, and retweets. But as an artist he has a strong desire to look deeper–a desire to examine how technology is altering how we interact with the world and each other. As he asked at a recent WIRED 2013 Conference (UK) when examining evolving friendships in a social media landscape, “What does it all mean?”

Jones is the creator of the popular and highly influential spoken poem “Touchscreen,” a work that evokes the delicate balance between our expanding impersonal digital connections with our innate desire for authentic human interaction. In a world filled with touchscreens, we still long for the intimacy of human touch. The piece evolved from his frustrations with trying to keep up with an expanding digital world that, instead of freeing up our time, requires countless hours of updates.

“As an artist exposure is important so I had a profile on every social network fighting for supremacy. One day I was completely overwhelmed with how scattered I felt. How lost and futile my efforts were. Thus, I began where it started…that frustration.” Part of Touchscreen goes as such:

my world is so digital

it used to be hard to connect when friends formed cliques

But who am I to judge?

more than books face me

I update my status

to prove that I am still breathing

failure to do this daily

means my whole web wide world will forget that I exist

Touchscreen isn’t a manifesto—it’s about our internal conflict. It strikes a nerve with our nuanced feelings towards technology creeping into every facet of our life. We don’t want a world without the Internet or social networks, but we are starting to debate how we want them in our lives. We can love our technology without being a tech fundamentalist.

The poem also explores our existential identity. We are increasingly spending our time curating our online avatars—what effect is this having on the individual behind the persona? You may be noticing a growing trend for online profiles to list a variation of the line, “I am human.” That unusual statement seems to be a reaction towards a world that can seem too artificial for our comfort level. Our digital world makes the verification of authenticity difficult (see Catfishing), so we respond by offering an assurance of legitimacy. It is a modern spin on the classic philosophical pondering: if a tree falls in the woods and nobody hears it, did it make a sound?

Touchscreen was written in 2010, but recently it has taken on a life of its own. Lately it has been embraced by the tech community as a conversation starter and jumping point to explore technology’s role in our lives. Whereas the question used to be, “What CAN technology do for us?,” it has started to evolve towards, “What SHOULD technology do for us?”

“At the time it was written we were all still glamorized with social networking and mobile devices,” says Jones. “When it did strike, the conversation was beyond my piece. It was a discussion that the mainstream began to have. I believe the poem was the nerve struck. The ouch resulting from our new environment and the scream for help. In short, it was an idea whose time had come. Only time will tell what will become of it.”

Jones foremost considers himself a “world-bridger,” an artist able to be provoke meaningful conversations across a broad range of backgrounds. Touchscreen is a rare work that can influence both the consumer and the creator. “The real surprise was when I was asked to perform this piece at a tech conference sponsored by will.i.am and Intel. Not only were the people listening but the minds and hands behind our technology were listening too.”

Similar to the statement “I am human,” it is crucial to note that everything that is artificial is created by someone that is human. The conversation we have today is influencing what we create and allow as a society tomorrow. As Jones puts it, “Everything we create is a manifestation of our consciousness.”

The conversation that Touchscreen brings to the forefront is that every piece of technology provides a tradeoff. We have spent the last few years heralding the wonders of our wizardry, whereas now we are beginning to step back and examine the effects. “Technology has advanced us and has always been at the helm of our growth as a species,” says Jones. “Perhaps though, what concerns me is obsolescence. The obsolescence of our intimacy. The obsolescence of physicality and contact. When we all communicate on screens and those screens outweigh our off screen time we could be compromising a very important part of ourselves…emotional intelligence.”

At the end of the day, Jones is an entrepreneurial artist who embraces the many benefits of smartphones and instant connections while also being mindful of how he is around others. He can create all of his work on his smartphone, but also realize it’s time and place. “When I’m working on a project, I’m in constant contact. But when I am with my daughter, I am with her. When I am with my friends, I am with them. The mobile device has to sit somewhere far away. Or else, psychology kicks in and kicks my ass.”

Marshall Davis Jones, above all, is human.

Imagine two friends are sitting at a bar drinking a beer. Clanking their glasses together, they go about trading stories from their week. They laugh, argue politics, needle each other about their respective sports team, and occasionally have philosophical meanderings. It is a moment of joy and connection.

Now take those same two people and place the focus solely on the beer consumption. Instead of laughing, their attention has shifted primarily to drinking. Each frosty pint delivered by the bartender offers endless possibilities that slowly dissipate with each gulp. Despite their physical proximity of nearly touching, their engulfment in alcohol borders on loneliness. The scene is sad and desperate.

Alcohol, as most of us are aware, can often be a springboard to joy OR a pathway to misery. It is all about how you are using it (or, if it is using you). Smartphones deserve the same nuanced view. They can offer a tremendous source of personal connectivity that paradoxically leads to disconnection and alienation if, like the example above, they are abused.

There is a wonderful video that is making the rounds on the Internet called “I Forgot My Phone” that illustrates this point quite succinctly. The main character, without her phone, walks through a world with people obsessed with texting their whereabouts, recording special moments instead of feeling them, taking pictures of champagne flutes instead of enjoying it, and giving virtual friends status updates while ignoring actual friends. Lying in bed with her boyfriend, he seeks outside connection while being oblivious to the missed connection in his arms.

As the video makes clear, something is fundamentally changing about how we not only live life but how we view life. Are we living our life or are we observing our life? Somewhere along the line many of us have been experiencing what media theorist Douglas Rushkoff calls “present shock.” Present shock is our inability to bridge the gap between our online and offline identities. It’s a dissonance between being elsewhere and being in the present moment.

Our smartphones, if abused, can take us out of the present moment. For example, a concertgoer who takes out her smartphone to snap a few photos of the band is using the phone to supplement her experience. If, however, she keeps the phone out for the entire show to take pictures, videos, send tweets, and check-in, she becomes a viewer to her own experience. She would need to see her pictures, watch her videos, and read her tweets to later experience her own missed experience. She moves from being an active participant to a casual observer—in her own life.

Our fascination with real-time updates may be getting in the way of our real-time living. Frankly, it seems more shocking in 2013 to see two people engrossed in conversation than two people engrossed in their smartphones. On one hand it can seem comical: two friends texting other friends to update them about the wonderful time they are having. Their longing for connection juxtaposed with their inability to actually connect beyond the superficial.

So next time you are sitting at the bar with your friend, keep the focus on the actual moment. If someone sends a text to ask you where you’re at, you can politely respond with a double entendre before putting your phone away—I’m here.